02.2021 Alison Nordström writes about Motiongraph #108 for French Museum of Photography . 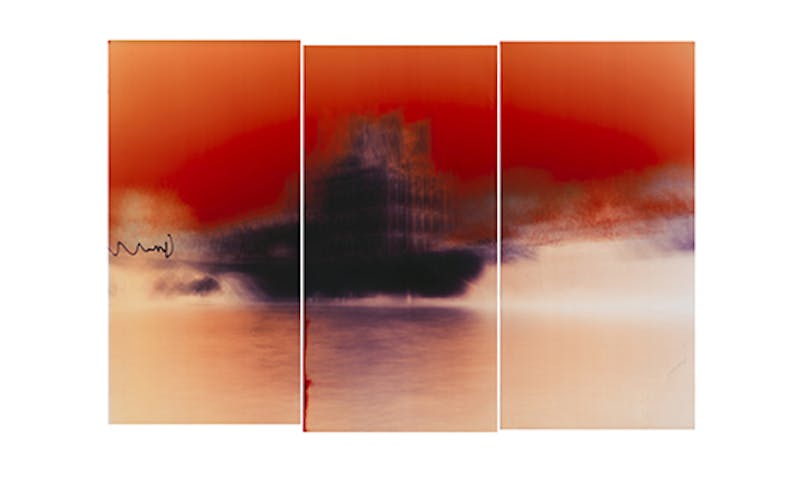 Maciej Markowicz’s Motiongraph #108 shows Le pavillon de Flore, of the Palais du Louvre, as seen from the Seine. It consists of three singular paper negatives assembled as a triptych. The three juxtaposed images remain separate, their heights adjusted slightly to construct a coherent visual whole. There is an immediate tension between the venerable building rising above the eternal river and the image’s epic scale, bold chemical colors, and almost electric energy that assert its contemporaneity. In this arrested moment there is the sense of permanent stillness we expect in photographs, especially of familiar places, but here there is also a depiction of motion, inherent to the artist’s unique personal process and philosophy.

There are many photographs of the Seine and its environs, beginning with the efforts of Louis-Jacques-Mandé Daguerre himself, in 1839, when the process he discovered was only a few months old. As early as 1851, Édouard-Denis Baldus began his epic documentation of the monuments of France, contact printing from large paper negatives that captured light on stone. His image of the pavillon de Flore taken from the bank opposite at quai Voltaire is focused, detailed, and enduring. Motiongraph #108 employs materials and scale that would have astounded photography’s 19th century pioneers, yet its subject, its process, its intention and its vantage point would have been familiar to them. Like his esteemed predecessors, Markowicz uses the technical tools and artistic choices at his disposal to create a permanent representation of a momentarily captured view. He does so with a strong awareness of the river as a metaphor for the passage of time, and the photograph as a record of a fleeting moment made permanent and still.

Markowicz uses the camera obscura, a profoundly simple and ancient apparatus consisting of a darkened room with a small hole in one wall, sometimes fitted with a lens. Light from outside the room passes through the hole and projects an image onto the wall opposite it. The image appears upside down and backwards although it remains uncannily precise in perspective. By positioning large sheets of color-sensitive photographic paper where the projected light falls, he creates a one-of-a kind chromogenic paper negative, which he presents as a singular work of art in its own right. Markowicz’s darkened room takes the form of a handcrafted boat designed to be all-at-once camera, transport and dwelling. In it, the artist has travelled the rivers and canals of Europe, from Berlin where he is based, to Amsterdam, Hamburg and Paris. His captured glimpses are taken from mid-river. The camera that captures the light of a few moments is moving on the river as it flows.

The camera emerged at the start of the industrial revolution. It was viewed as a technical wonder, the magical workings of which were perhaps of greater interest than any particular image it might produce. Fascinating as it is, Markowicz’s personal artistic process for producing an interpretation of a few moments on the river should not distract us from the strong and evocative images he makes. Today, the photographic artist has a wide range of tools to choose among, but it is the artist’s vision that drives those choices. Paris, where photography began, remains one of the most photographed cities in the world. This photograph takes its place within photography’s history, and the history of Paris, as a moment captured in the flow of time.

Alison Nordström is an independent Scholar/Curator of Photographs based in Cambridge, Massachusetts.